by Nick Walters & The Paradox Ensemble 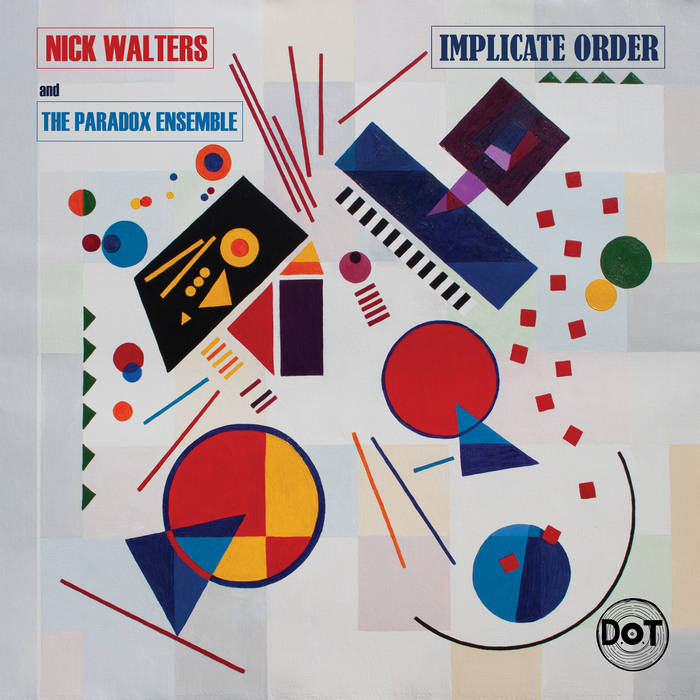 sumbuk This is AWESOME! Sadly, it's also only a half hour; but man, what a half hour it is. Paradox is an excellent large jazz fusion ensemble, and Nick Walters' compositions are top shelf.

'Implicate Order' is the third album from Nick Walters' Paradox Ensemble, and the first release on new label D.O.T. Records. The 11-piece band continues to break the mould of big band jazz, combining spiritual and eastern jazz moods with West African rhythms and a fusion of electronics. 'Implicate Order' follows up the band's highly acclaimed 'Awakening' released on 22a in January 2019, and their debut EP 'Entanglement' released of Efpi Records in 2013.

The artwork by Lorna Robertson (www.instagram.com/lorna.robertson.art) is specially commissioned - a Kandinsky inspired abstract representation of the 11 musicians involved.

The album kicks off with The Underdog - a sprightly tribute to Charles Mingus, inspired by his classic album 'The Black Saint and the Sinner Lady’. Walters’ lofty trumpet takes the lead, conducting the 11 piece band along a catchy hook, brought to a head by the excellent Richard Foote on Trombone.

Volta Region continues the vibrant start to the album. Named after a beautiful region in Eastern Ghana bordering Togo. The main riff to the song came to Nick whilst travelling in that region, after a few years of playing around with it and experimenting he managed to use it as the basis for this extended composition.

Be Seeing You rounds up the a-side - inspired by the classic 60s tv show The Prisoner, an attempt to write a piece with a similar sense of energy, drama and excitement that could accompany an action scene from the show. Featuring a stand-out solo from Sam Healey on alto saxophone.

The b-side sets a much darker and more spiritual tone, kicking off with the epic Diminishing Returns - an exploration of the different harmonic sounds thrown up by the symmetries of the diminished scale. Ruby Rushton keys player Aidan Shepherd bestows one of the highlight moments on the album with an accordion solo that is as good as it is scarcely heard in jazz music. Ed Cawthorne aka Tenderlonious follows up with a solo of his own on flute, guiding the band towards a moment of free-flowing, improvised exuberance.

Implicate Order completes the album in exquisite fashion - inspired by the work of theoretical physicist David Bohm and his concept of the Implicate Order, an attempt to understand the mysteries of quantum mechanics by positing the existence of a deeper or more fundamental layer of reality (in contrast to the Explicate Order of our everyday experience). The theory emphasises the fundamental wholeness and unity of all seemingly separate phenomena in a similar way to the intuitions of Eastern mysticism, and led to Bohm corresponding and collaborating with Eastern philosophers such as Krishnamurti and the Dalai Lama. Walters’ compositional talents rise to the fore on this one, pushing the band along in Evans/James fashion. Rebecca Nash provides a moment of magic with a piano solo, followed by the whole ensemble coming together, marching the lead off to the end of another wonderful album from Nick Walters & The Paradox Ensemble.

All compositions by Nick Walters

Recorded and mixed by Rhys Downing

Artwork and design by Lorna Robertson

Bandcamp Daily  your guide to the world of Bandcamp

Featured sounds by K.Spark and WIZDUMB, plus Basi joins the show to discuss his latest release.